Your #1 fansite for the beautiful and talented actress

Welcome to the El Royale. Watch the official trailer for Bad Times at the El Royale, in theaters October 5, 2018. pic.twitter.com/JiYdYOBwqe

Seven strangers, each with a secret to bury, meet at Lake Tahoe’s El Royale, a rundown hotel with a dark past. Bad Times at the El Royale in theaters October 5, 2018. 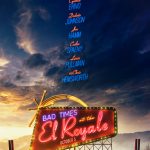 Dakota Johnson and Zazie Beetz are in negotiations to join Armie Hammer in Annapurna’s untitled thriller.

“Under the Shadow” helmer Babak Anvari is writing and directing the movie, with Lucan Toh of Two & Two Pictures, Christopher Kopp of AZA Films, and Annapurna Pictures all on board to produce.

The film follows a New Orleans bartender (Hammer) whose life begins to unravel after a series of disturbing and inexplicable events transpire when he picks up a phone left behind at his bar.

Annapurna is fast-tracking the pic, having already set a March 29, 2019, release date.

Johnson recently wrapped the final installment in the “Fifty Shades” franchise, “Fifty Shades Freed,” which has grossed $347.2 million worldwide. She just finished production on the indie “Peanut Butter Falcon,” opposite Shia LaBeouf, and the Amazon thriller “Suspiria.” The actress is currently shooting the Fox film “Bad Times at the El Royale” with Jeff Bridges and Chris Hemsworth.

Films a Scene on Thursday night in a Supermarket:

Dakota Johnson and Jamie Dornan on Set of Fifty Shades Darker on Evening of March 15, 2016

Credits to fiftyshadesofgreyfan for all the Pictures

Credits to fiftyshadesofgreyfan for all the Pictures.

Thank you fiftyshadesofgreyfan for the pictures

Thank you so much to fiftyshadesofgreyfan for all the Pictures. Credits to all the Photographers.

A young boy with down syndrome runs away to fulfill his dream of becoming a professional wrestler.

Disturbing and mysterious things begin to happen to a bartender in New Orleans after he picks up a phone left behind at his bar.

Dakota Johnson Fans is a non-profit fansite, 100% unofficial, and has no affiliation with Dakota herself or anyone around her. Please do not send any fanmail to us for they won't be forwarded to Miss Johnson. All photos are copyright to their respective owners, no copyright infringement is ever intended. Any material seen on this website and is used, to the best of their knowledge, under the "Fair Use" copyright laws.

Are you a frequent visitor to DJFAN? Have any photos, captures, etc that you see missing in our gallery that you would like to donate to the site? If so, feel free to send them our way. If you would rather donate multimedia or videos, that is welcome as well! Remember to include how you would like credited in the email along with the donation.

What can you donate?

Send donations to jusantoss02@hotmail.com.
Please include how you would like to be credited (link, nickname, etc)

© 2013-2020 Dakota Johnson Online / Theme by Sin21 / Back to top / Homepage
Dakota Johnson Online is an unofficial fansite. We have no contact with Dakota, her friends, her family, representatives, etc. This site is made by fans for the fans. All images in the gallery belong to their respectful owners and no copyright infringement is intended. If anything belongs to you, please contact us and we'll remove it.